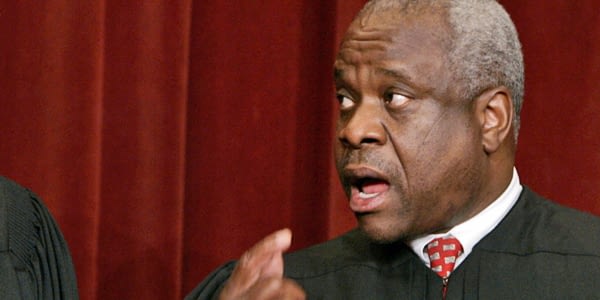 Washington D.C.—The chances for President Barack Obama’s Supreme Court nominee have just improved. After ten years of silence, Justice Clarence Thomas finally spoke. Those in attendance strained in their seats. Some people stood in the back of the courtroom. Collectively, they all held their breath as the Justice said, “Ms. Eisenstein, just one question.”

After asking about the second amendment and misdemeanors, Justice Clarence Thomas pointed to the floor and asked, “What is that? What is that?”

A visibly shaken Clarence Thomas then burrowed back into his chair, hugged himself and muttered, “two more terms of liberalism. Two more years,” he screamed, before closing his eyes and taking deep breathes.

According to SCOTUSBlog‘s Amy Reynolds, “It’s unlikely Justice Thomas will speak for at least another eight years. We must wait till the a Leap Day. He’s a delicate soul.”