Tinker, Tailor, Solider, Spy by John le Carré is an inaction-packed suspense novel about a high-level mole in British intelligence and one man’s mission to uncover the traitor and take him down.

I say inaction-packed, because most of the novel involves George Smiley, the former second in command of the service, sorting through old files, interviewing former colleagues and contacts, and piecing together the puzzle.

The novel creates a sense of paranoia. Characters don’t trust one another and everyone is playing a side angle. What’s the truth though? That’s exactly what Smiley is asking. He’s after facts, and for his own sanity, does not make judgments on people. How could he? Smiley also sold people out and torched networks as part of a bigger game. Smiley knows he can’t look to morality or ask why. Instead, he focuses on the other questions of how, who, when, and where.

There is a page-turning aspect to the novel, but it’s because the reader also wants answers and not because action is taking place. Are those answers as dissatisfying to the reader as they are to Smiley? Did we know all along who the mole was, just like Smiley did? I’m not sure. It’s not surprising at the end, but it’s also not entirely satisfying.

The heart of the novel is more about the men in control of British intelligence during this period. The men who were “trained to empire, trained to rule the waves,” but found it  “all gone. All taken away.” That’s the interesting part of Tinker, Tailor, Soldier, Spy. How did England adapt to its new place in the world? What was the realization like for the English as they saw their power diminish?

Tinker, Tailor, Soldier, Spy is a slow-moving novel that draws the reader in. Compared to the high-tech spy world of today, the novel is a window into a different time. The novel was  originally published in 1974 and is available through Amazon. 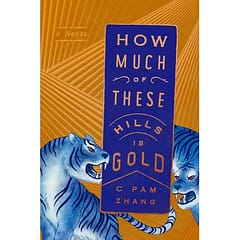 Place and Identity in How Much of These Hills Is Gold

If J.D. Salinger Wrote This Book: He would've never published it.

Review of Where'd You Go Bernadette, by Maria Semple, along with suggestions on clothes and what to eat and drink while reading.