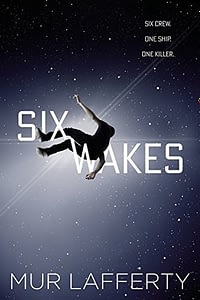 Six Wakes by Mur Lafferty is a promising book with some glaring issues. In one sense, Six Wakes is a closed room mystery with a science fiction twist of clones. The crew of a generation ship is made up of six clones who happen to be convicts kept in check by the ship’s A.I. The action opens with the clones waking up in their pods, naked and covered in goo while their previous bodies float around in zero gravity having been gruesomely murdered. One of them is the murderer. So, what’s the catch? The clones have no memory of the last twenty-five years. Their most recent memories are from when they first boarded the ship. Moreover, the A.I. is no help as it’s been sabotaged and all logs scrubbed.

Everyone has a secret and supposedly no other crew member knows the other’s past. The cast is made up a captain, first officer, pilot, doctor, programmer, and all-purpose mechanic. These jobs sort of work like the jobs in Wool; they obfuscate people, make it appear as if the title or uniform is the representative of the person. Of course, as you learn about the character’s pasts, they present comes into focus.

The first issue I had with this book is it treads very close to the TV show Dark Matter. Six people wake up in stasis pods with no memories. In the case of Dark Matter, the characters are total blank canvasses, while in Six Wakes only the last twenty-five years are gone. Still, it almost feels like a Lafferty borrowed elements of the show for Six Wakes.

In the first one-hundred pages, Lafferty gives away the whole plot or mystery. When death is off the table, how does one get revenge against a clone? The plan has the grandiosity of Dr. Evil and it’s also broadcast to the reader so early that it takes away the joy of figuring the mystery out. It doesn’t really matter who the killer is when you figure out the whole mastermind. Imagine if in the movie The Usual Suspects we knew within the first twenty minutes that Verbal Kent was making up the whole story based on details from the detective’s office and that he was really Keyser Söze? Lafferty tips her hand and the novel suffers for it.

Too Clone or Not to Clone

What I really liked about the novel are the ethical questions Lafferty raises about clones. She opens the book a set of laws governing the creation and rights of clones. Also, the character’s backstories fill in these issues with “real life” examples. Could Six Wakes explore these issues without the mediocre plot device? I think it could, but it would’ve been a much different book.

I liked this book; but it could’ve been a lot better. Perhaps the echoing of Dark Matter was a mistake, but between that and the ridiculous/obvious plan it really leaves the reader let down.