The Dark Forest by Cixin Liu 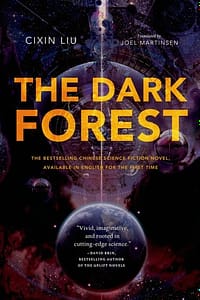 At this point, I’ve finished the series. It’s an overwhelming scale of time and events. I’ll do my best to focus on The Dark Forest in this sprawling narrative.

Out of the three books, The Dark Forest is by far the best one. The Trisolarans will attack Earth in 400 years. They’ve capped research in fundamental Physics by with their higher dimension sophons. Those same sophons are able to transmit information instantaneously from Earth to the Trisolaran fleet. With no secrets, what’s Earth to do?

One tactic is the Wallfacer Project. Four people are chosen and vast resources are allocated for their use. The goal is to dream up a strategy for defeating the Trisolarans without communicating that strategy to anyone. The human mind is a blackbox. Everything these people do is scrutinized, because maybe it’s part of their plan. Or, maybe they just want to live in a dream villa and have a fantasy life. Another interesting part of the novel is a character who, while not a part of the Wallfacer Project, nonetheless, has his own secret plans for thwarting Trisolaris.

The title of the book becomes obvious toward the end of the novel. I don’t want to give anything away, because I really enjoyed the reveal.

In terms of writing, there is greater fluidity. My thought is that Joel Martinsen is a more accomplished translator, or perhaps, Cixin Liu, improved. For a better review than mine, and one that has a couple spoilers, check out Gerry Caravan’s review in the Los Angeles Review of Books.