Exclamation points, like so many symbols, have a specific function and many unintentional meanings. Technically, an exclamation point is a sudden cry or yell that can be full of emotions ranging from anger to excitement. However, exclamation points are the all-caps-email of punctuation. They often feel out-of-place and come across as unnecessary yelling, like that email from an aged relative that says, HOW IS LIFE IN THE BIG CITY? CAN’T WAIT FOR YOU TO VISIT. THE TURTLES MISS YOU. Of course, there is the ironic exclamation point in names like Yahoo! and Swamplandia!, but really, beyond an exclamation, what is the point?

All this is to say, readers, beware. Take one look at the exclamation point after Swamplandia! by Karen Russell and turn back, because nothing on this trip through the Floridian swamp can save you.

The novel features the dissolution of a family following the mother’s, Hilola’s, death by, you guessed it, cancer. Dickens had consumption and contemporary writers have cancer. It’s convenient and a writer doesn’t have to fill in too many details, because we all know someone who’s had cancer or lost someone to cancer. Smallpox on the other hand would involve at least a morning’s worth of research. So, the family, they refer to themselves as the Bigtree Tribe, even though they’re not native American, has an alligator wrestling amusement park called Swamplandia! and it’s in a bad way after the mother dies.

Chief Bigtree is head of the family and he has three children, Kiwi, the eldest boy, Osceola, the middle daughter, and Ava, the youngest daughter. The children have been home schooled and have a fairly skewed perspective of life outside of their island home. Kiwi, acting in his role as plot device, leaves the island, is employed by the new, rival theme park, World of Darkness, and becomes a pilot. Osceola pretends she is dating a ghost and gets wrapped up in the occult and masturbation. Ava, unable to tell what is happening to her sister, goes off in pursuit of Osceola, who runs off with her ghostly lover to elope. The person Ava embarks with on this trip goes by the name Bird Man and he promises to take Ava to the underworld. Meanwhile, the Chief has skipped it to the mainland. His absence facilitates the disappearances of his daughters.

The sections from Kiwi’s perspective felt as if Karen Russell were trying to write like Gary Shtyengart. Kiwi is socially backwards, naive, and greatly overestimates his abilities. Unlike an underachieving Shtyengart protagonist, Kiwi is not at all self-aware and fairly unlikable. It takes a knack to write the lovable loser and keep a reader interested. What further undermines Kiwi is when we learn that the World of Darkness would like to train some employees to be pilots. As soon as this happens, the reader knows Kiwi will swoop down and save his sisters. And of course, he does. The result is a mechanism that pretends to be a character.

While the sections from Ava’s perspective are better, they’re still as slow as water moving through the river delta. Ava’s relationship with the Bird Man seems off and the reader is waiting to see what happens. Will the Bird Man help her or hurt her? It’s quite a few pages to find out, but the novel definitely shifts as the pace picks up. However, by this point, the reader may be reading just to see what happens with Ava and it becomes a struggle between curiosity and endurance.

It seems like Russell wants to tell some of the folklore of the swamps and create a landscape mixed with magic and danger. As the horizon opens up, it may be possible for the world to open and impossible things could come true. But, as the reader senses that world through Ava it all comes crashing down. There is no magic. And the dangers, while real, are altogether ordinary and sad.

If you made it this far and are looking for something to read, I have a suggestion. Better yet, if like me, you were disappointed with Swamplandia! and all the hype it received, the same suggestion will work. Read, Lamb, by Bonnie Nadzam and, Kangaroo Notebook, by Kōbō Abe. Lamb tells the story of a young teenage girl who goes on a journey out west with a middle-aged man, while Kangaroo Notebook is about a man who turns into a radish and journeys to the underworld. Combined, they tell a similar story as Swamplandia!, but are full of beauty and creativity. The one part of Swamplandia! that sticks out is the chapter entitled “The Dredgeman’s Revelation” and which was published in the New Yorker. It’s a wonderful, but misleading piece of writing as nothing else in the novel comes close. 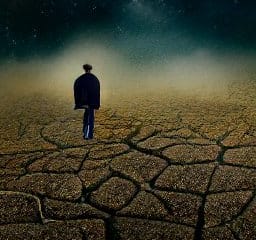 If you click on the Craiyon-generated image, the larger view looks creepier. Today’s image is of Heinlein’s classic, Stranger in a Strange Land, though I wonder how the AI pulls from the Bible. Valentine Michael Read more… 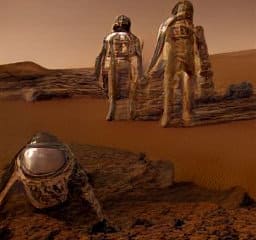 I love The Martian Chronicles by Ray Bradbury. On the left, we have the 1984 paperback cover. On the right, we have Craiyon AI‘s interpretation. Events in the chronicle include the apocalyptic destruction of both Read more…

AI Science Fiction Book Covers: The Day of the Triffids