In “Sun City” by Caitlin Horrocks a young woman goes through her recently deceased grandmother’s belongings and tries to gain a better understanding of her grandmother in the process.  What really caught me with this story was the opening.

“The floated into the afternoon in their little stucco submarine, the blinds shut against the sunlight and the swamp cooler whistling on the roof. Bev sat on the couch, Rose knelt on the matted carpet, and in the artificial air the two women wrapped jewelry in tissue paper and placed it in egg cartons. Rose had had this idea, the egg cartons, on the plane to Arizona, and it had made her feel organized. In the aftermath of her grandmother’s death, at least there were omelettes to be made. When she realized just how much stuff her grandmother, Vera, had owned, and how little of it Bev wanted to keep, Rose should have come up with a new plan. Instead, they just kept eating eggs.”

I enjoy the description of the stucco submarine withe the swamp cooler on top of the roof. It creates a strange image for the desert. Next, there’s Bev and Rose, with Rose kneeling, wrapping the jewelry. It’s a peaceful image that shows some intimacy. Horrocks also gives us some information in a way that’s not condescending. We learn that Rose is unprepared for this role and didn’t visit her grandmother often. In the final sentence of this paragraph, Horrocks displays humor in the amount of eggs the women eat. It’s an odd detail that ties everything together well.

“Sun City” is a story where everything is not as it seems. Were Bev and Vera lovers or just two old women who shared a house? We believe they had a relationship together, partly because the point of view is that of Rose’s. She thinks Bev and Vera were more than roommates, through the joint Christmas cards and pictures the women would send. As the story moves forward, we discover Rose may be projecting onto her grandmother. It turns out that Rose is gay and her grandmother disapproved.

Another revelation is Vera’s past. Vera was estranged from her daughter, Rose’s mom, and besides being a harsh woman, she used to have a drinking problem as well. Rose’s memories of Vera are spending one week a year with her as a child, while Rose’s mom went on vacation by herself. The estrangement carries on as Rose’s mom has no wish to go through Vera’s belongings, which illuminates why Rose is stuck with the job. It’s sad to imagine family not caring, but beneath the charade of occasional letters and phone calls, we realize the truth of what Vera thought of her daughter and granddaughter.

The intimate scene of Bev and Rose breaks down over the days. It is Bev who tells Rose the truth of Vera and that leads to problems between the two. Rose doesn’t know what she’s doing there and Bev feels as though her space is being intruded upon. The two come together again by rebelling against the spirit of Vera. They drink vodka and rum, reminisce, and try to help one another. However, the ending is wrapped in such an obvious metaphor that it becomes a little too neat. Bev is literally in over her head, grasping onto Rose for support in a swimming pool. The story concludes with Bev clinging to the pool wall, drink in hand, while sitting on the edge of the pool Rose raises her drink in the air. “‘Medicine,’ she offered, and they drank, as if it might be some kind of cure.”

“Sun City” was published in the October 24th issue of The New Yorker. For an interview with Horrocks regarding “Sun City” please read the Book Bench. 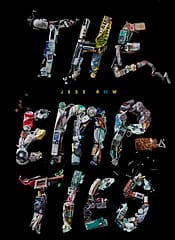 Published in the October 27, 2014 issue of The New Yorker, "The Empties" by Jess Row is a postapocalyptic (or is it distopian?) short story set in the Northeast. What grabbed me about this story was in the fourth paragraph, where Row's characters step back and view their own narrative. What story are we in? What's happening?

Checking Out by Chimamanda Ngozi Adichie as Told in Tweets