Excession, A Cool Concept for Sci-Fi 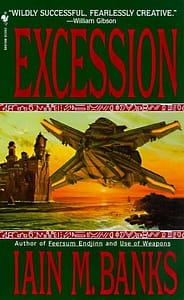 As a concept, the Culture novels are wonderful; but at times the narrative crumbles under the weight of drawn out plots and overly detailed moments. In Excession by Iain M. Banks, the Culture faces a threat unlike any it’s known before, an object or species with superior technology that is both a terminal threat to the Culture and an opportunity to evolve beyond four-dimensional life. That’s cool, right?

But, Then Robots Talk for Pages and Pages

Chunks of the novel revolve around Minds making plans. Since the Culture is sort of a democratically led consensus of artificial intelligence that prides itself on transparency to a degree, the reader witnesses Minds conspiring, delving into tactics, panicking, and being prickly with one another. It’s long-winded and boring.

A Love Affair Because Why Not?

Enter two main characters, Byr Genar-Hofoen, a diplomat who is a bit of rogue and Dajeil, a scientist, who’s been living aboard an eccentric ship, which stores people’s bodies in tableaus while they hibernate till a more interesting time. The ship considers it art. Meanwhile, Dajeil, lives in a recreation of the home she shared with Genar-Hofoen, and she has paused her pregnancy since the couple split twenty-some years ago. It does make some of the themes of gender fluidity interesting, but it feels unnecessary, like an added complication just to ratchet up the drama.

An Opportunity for Gaseous Airbags to Attack

While the excession event occurs, a warlike species of aliens, called the Affront, which Genar-Hofoen admires decides now is the time to try to take the Culture. Banks does a wonderful job in creating non-humanoid aliens, and they are interesting. However, they action the Affronters provide isn’t enough to rescue the slow pace of the novel.

Could Banks edit this 500 page novel to thirty pages or go for a novella at 120 pages? What would the narrative lose? The idea is great, an outside threat to the Culture which they can’t understand. But there is so much excessive exposition. Characters and Minds talking to provide information, that isn’t even that relevant, to the reader. Yes, the idea that Genar-Hofoen wants to become an Affronter for a while is interesting, but maybe that could be it’s own short story. In the end, Excession was terribly long and dull.