Give Up Control and Read Authority by Jeff Vandermeer 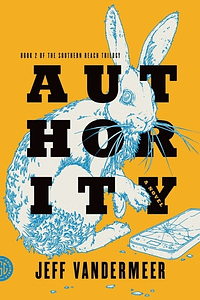 In Authority, the second book of the Southern Reach Trilogy, the Biologist returns, but in the form of a minor character. Perspective shifts to John Rodriguez, the new director of the Southern Reach. Either as a foreshadowing of the dehumanizing process of Area X leaking out, or an ironic machination of John, someone else, or the writer, Jeff Vandermeer, John Rodriguez goes by the name Control. It inhabits his job at the Southern Reach, much like those people who went on expeditions. A noun, a verb, a desire, control is what he seeks; but is such a thing possible?

While I liked this novel, I did not like it nearly as much as Annihilation. The forward action of Annihilation is diverted into backstory about Control. As a character, Control is not as interesting at the Biologist. However, it’s still an entertaining novel and is needed for the third book, Acceptance, to make sense.

So, who is Control? He’s the fuck-up son and grandson in a family famous for their work in United States intelligence. If Control were an athlete, he’d be a mediocre quarterback tagged as a game manager or journeyman. Control is no one’s first choice. He’s there because there’s a problem and he probably won’t make things worse.

What Control offers for the narrative is another outside perspective, this time of the Southern Reach as a whole and not specifically Area X, as the Biologist had in Annihilation. We learn more about those involved in research and containment. We see how the dread and foreboding have crept out of Area X and into the Southern Reach. We learn why the expeditions were structured in such a way, why people were lied to, and what happened to the previous director. Control moves from pawn to player as his understanding expands.

What is Area X? In Authority we’re getting closer to understanding. Or, is it getting closer to us? How did the Biologist return? Again, the perspective of a portal or a gateway, there’s an interesting exploration of how words shape what we see. Is it an entrance or an exit? How much can one control and will there always be vulnerabilities?