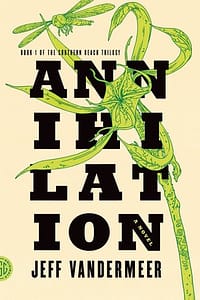 Jeff Vandermeer‘s, Annihilation, the first novel in the Southern Reach Trilogy is steeped in tension and the unknown. It’s horror in the classic sense of impending dread, an off-screen presence whose gaze is fixed upon the characters and the reader. I was reminded of House of Leaves or The Haunting of Hill House.

Instead of a house though, there is a section of land known as the Lost Coast along the Gulf, somewhere in Alabama. A barrier formed years ago all around it, a shimmering, impenetrable bubble with one entrance, or is it an exit? Those inside the barrier when it was created are gone. The landscape is overgrown. Pristine. All traces of pollution expunged. What is the cause? What happened? These are questions being asked by the team members of The Southern Reach, the government research center that sprung up to study Area X.

Expeditions are sent in. Hardly anyone returns.

There are aspects of Area X difficult for humans to comprehend. As the expeditions continue on, the personnel at the Southern Reach adapt and modify the teams. Hypnotic suggestion is used. Psychological profiles assembled. People are dehumanized into roles as names are erased. In the current expedition we meet the Biologist, the Psychologist, the Anthropologist, and the Surveyor. Within Area X there is a previously used base camp, the lighthouse, and another structure, which the Southern Reach never tells the expeditions about.

I found this slim novel compelling, creepy, and wonderful. It felt original and drew me in with its mystery and characters. While the answers will not be discovered until the end of the series, the reader witnesses firsthand what happens to those who enter Area X.

2 thoughts on “The Delightful Horror of Jeff Vandermeer’s Annihilation”