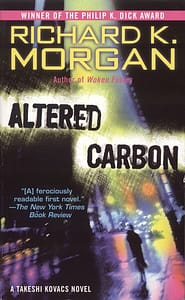 In Richard Morgan’s highly creative novel, Altered Carbon, science-fiction meets mystery. The main character is a former Envoy, sort of like an elite special-forces member with mental conditioning to absorb information, analyze data, and manipulate people. Takeshi Kovacs, now a criminal, gets a reprieve from years stored on disk and is transmitted to Earth to solve a murder for a client who is over three-hundred years old.

Altered Carbon shares a grim, dinginess similar to Blade Runner. Inequality is rampant. While technology has rendered things like death to mostly be removed, quality-of-life isn’t vastly improved for a lot of people. The 1% now live hundreds of years in a rotating cast of tech-infused bodies. They are called Meths, short for Methuselah, and their empathy for humanity seems to fade as the human condition does not apply to them. Wealth and power are amassed. Business strategies play out over lifespans. Woe the little people who get in their way.

The client wants Kovacs to prove that he was murdered. The police ruled the cause of death to be suicide. Due to the forty-eight hour gap since the client’s last upload, he has no memory of what happened. Why would he kill himself? Was he murdered? These questions drive the narrative.

Morgan does an interesting job shaping the universe of Altered Carbon. We know that humanity spread to other planets in the galaxy. We learn it’s easier to transmit consciousness to a new body light years away, then it is to physically travel between planets. Aliens exist, but maybe they’ve all been wiped out before people travelled to the stars. The U.N. exists. There are colonies. There is a possibly rogue world called Harlan’s World, which Takeshi Kovacs is from. Catholics morally refrain from having their consciousness downloaded. Life, in a sense, is sacred.

If an antique telescope is introduced in the opening scene between the detective and the client, the detective should look through it. If a cutting-edge, tech-enhanced ninja body without a consciousness is stored in a tank, it will be worn. There are some issues with obviousness in the novel that Morgan has trouble with. The ninja body, not so much; but the telescope as clue that Kovacs misses is troubling.

Should You Read This Novel

Yes. If you like science-fiction that pushes toward mystery and adventure, Altered Carbon is a wonderful read. It’s inventive. It doesn’t talk down to the reader. The main character is an anti-hero trying to do right, whatever that means to him. I loved the book and plan to read the next in the series.