The Fifth Season by N.K. Jemisin 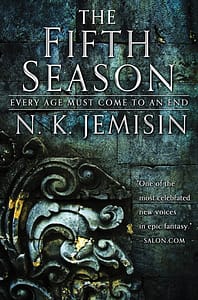 As a fan of fantasy novels, I love when writers try something new. In The Fifth Season, N.K. Jemisin creates a unique world where instability and ruin seem to be the only constant. It could be Earth. A version of our planet so far in the future that we broke it and created a new dark age. There are aspects that remind me of the Marvel universe, except these mutants all seem to have geologic powers. Strangely enough, it also reminds of Thundarr the Barbarian, minus Thundarr, Ookla, and Princess Ariel.

The novel begins as sort of a post-apocalypse-revenge narrative. A main character’s son is murdered by her husband right before a cataclysmic event occurs. The mutants who have seismic powers keep the Empire protected, but are also slaves at best or killed by fellow villagers out of fear. Essun, the main character in this scene, is an orogene, someone with seismic powers. She’s powerful enough to protect her village from the wave of destruction and then sets off after her murderous husband, who also abducted their daughter.

The novel is told through three perspectives, that of Essun, who is in her thirties; Damaya, who is around eight-years-old, and Syenite, who is in her late teens. All of these people are orogenes and we see how the world appears to them according to their age. They each have a relationship with the Fulcrum, which rules over all orogene with a mixture of fear and Stockholm syndrome. Orogene have massive amounts of power and it can be used for either destructive or protective powers. Without the Orogene, there would be no empire as life in the Stillness is interrupted by fifth seasons, seasons of death.

The other interesting aspect of the novel is figuring out what’s happening. Why is the world like this? How do people survive? World altering events happen here from time to time. Think about the meteor that killed the dinosaurs, now imagine something like that happening every 200 to 500 years. Lore is recorded on stone. Villages or comms, as they’re called in the book, follow strict guidelines to survive. People have been divided into castes. Everyone has a bug-out bag. Food stores are saved. Doomsday preparation is a way of life.

As the layers peel away we learn more about the Stillness and the characters. As in The Inheritance Trilogy, the characters in this novel are rich and complex. We see more and more of them as time progresses and they grow into themselves. Speaking of characters, it was refreshing to have strong female leads and people of color in a fantasy novel. It adds to Jemisin doing something new and stands out in fantasy.

Why You Should Read This Book

For lovers of fantasy, who like interesting concepts beyond elves, dragons, and swords, as well as interesting characters, The Fifth Season is a worthy read.

2 thoughts on “The Fifth Season by N.K. Jemisin”