The Underground Railroad by Colson Whitehead 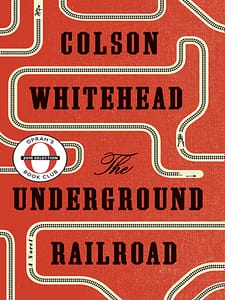 I didn’t want to read The Underground Railroad. I felt I needed to though. It was important to look into the mirror of American history, and see Whitehead’s perspective. The mix of slavery with fantastic elements plays on American’s dismal knowledge of history and willful whitewashing of the country’s founding and expansion. In some ways, I’m reminded of Annie Proulx’s Barkskins, which documents the human rights abuses Native Americans suffered at the hands of colonists, The United States, and Canada, in the context of natural resources. Both books focus on peoples who face dehumanizing actions by white citizens. Moreover, both novels have a multigenerational element that strings from the past to the present.

In a New York Times review, Juan Gabriel Vásquez, describes The Underground Railroad as being “about the myriad ways in which black history has too often been stolen by white narrators.” Vásquez further says the novel “is Whitehead’s own attempt at getting things right, not by telling us what we already know but by vindicating the powers of fiction to interpret the world.”

In The Underground Railroad, instead of a secret network of people shuttling slaves and providing shelter, there is an actual railroad with trains running underground. It’s an image that seems pulled from childhood as one tries to understand what the Underground Railroad was in elementary school history.

The main character, Cora, stops at multiple towns and cities, each with their own brutal treatment of slaves and black people. I had moments of looking things up in order to see if such places existed. For example, when Cora lives on a farm in the midwest, I was so curious to know more about that experience. What Whitehead doesn’t invent is the terrible experience of slaves. How does grounding a very real narrative into a fantastic setting change things? I wondered if the fantastic, as in fantasy, nature of the railroad and various stops made the slave experience more or less chilling? Is it easier to read? Harder?

As I mentioned earlier, I didn’t want to read this book. It is difficult, it is disturbing, it is also authentically American. In terms of writing, Whitehead’s writing is engaging and thoughtful, his characters are complex and compelling. Once I began the book, I was hooked. However, it isn’t enjoyable per se.

Other books I’m interested in reading in relation to The Underground Railroad are Exit West and Underground Airlines. Exit West seems similar to Whitehead’s idea but with Syrian refugees moving across the world through some kind of portals, while Underground Airlines is set in an alternate version of the the United States where slavery still persists. The three novels together seem like they might play off one another.

The Underground Railroad is a fascinating novel that explores slavery and American history in a unique and interesting way.

One thought on “The Underground Railroad by Colson Whitehead”