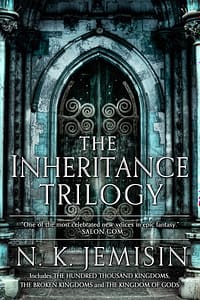 In the Inheritance Trilogy, N. K. Jemisin creates an imaginative, complex universe full of power-hungry people and gods aching for something more.

The first novel, The Hundred Thousand Kingdoms, introduces us to a world ruthlessly ruled by one family for 2,000 years. They have four gods enslaved to do their bidding. How can any nation rise up when they can be crushed by powerful deities? As the Borg would say, “resistance is futile.”

But, the enslaved gods have a plan to break free. Will they be able to pull it off and kill the other god who helped enslave them? What will be the cost to them or the world?

The second and third novels build on this story, but time has moved forward. In The Broken Kingdoms, ten years has passed since the events of the previous novel. It’s a vastly different world and hard to talk about without spoiling the first book. This novel has a totally different narrator and protagonist. There are a lot of new characters introduced and the universe that Jemisin creates becomes even richer.

In the third book, The Kingdom of Gods roughly another 100 years has passed. This time, the narrator is Sieh, one of the enslaved gods from the first book. Sieh is the god of childhood and the trickster god. He plays pranks. He’s vicious. He can be fun. He is also the first godling, child of the three main gods, and as a result is incredibly old. Instead of life as usual for Sieh, something inexplicable happens and Sieh becomes mortal. He begins to die.

Again, Jemisin alters her creation greatly. Events are set in motion that will drastically change everything. It’s refreshing to read. I get so tired of fantasy novels that are sort of static, where good defeats evil and they live happily ever after. When Jemisin continues her overarching story giant repercussions are felt throughout the world. It seems more realistic and she has a wonderful imagination.

Now that I’ve sped through some of the plot points, I’ll touch on a few of the commonalities in The Inheritance Trilogy. First, love and relationships play a larger part than in most fantasy novels. In each novel there is a love affair between a human and god. Jemisin does a good job describing that, but at times there seemed to be a romance-novel quality to it. It reminded me of Sookie’s love for Bill and Eric in Trueblood. There’s an infatuation with an other-worldly power, as well as a more sexual infatuation. This aspect of Jemisin’s novels didn’t appeal to me, but it also wasn’t a dealbreaker. It reminded me of fantasy writers who get focused on describing fight scenes. Again, pages of fight scenes aren’t my thing, so I skim them and I skimmed some of the romance.

What I loved about these books are the characters. Humans, demons, and gods are all complex and layered. It’s so rare to read fantasy novels that have depth of character. All too often there are flat characters moving through a plot. I’m not sure if fantasy is changing or if I’m reading more work that is richer? Either way, it’s a welcome change.

I enjoyed these novels. They are full of strong characters, both men and women, and gender-bending gods. Jemisin takes risks with her writing and it pays off. If you’re looking for a good series that doesn’t rehash fantasy tropes, I strongly recommend The Inheritance Trilogy.

One thought on “The Inheritance Trilogy by N. K. Jemisin”