The Republic of Thieves by Scott Lynch 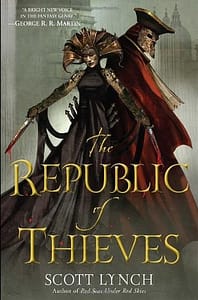 How do you write a 600+ fantasy novel? Write two 300 page fantasy novels and combine them. The Republic of Thieves by Scott Lynch is far more entertaining than his previous novel, Red Seas under Red Skies; but, the sections set in the past left me skimming toward the present.

My sense was that in killing off so many characters in the first novel, The Lies of Locke Lamora, Lynch missed those characters and wanted to tell a story about them. Through alternating, chapter-long flashback, we learn about Locke’s upbringing as an orphan turned thief and his life with both the Thiefmaker and Father Chains. There are some interesting moments, but not much is at stake. Lynch is filling gaps in Locke’s story. Is it important? Toward the end of the novel, one can make the argument that this backstory does matter; however, the story felt flat to me.

The present-day part of the novel picks up with Locke poisoned and dying, while Jean tries to find remedies. A remedy comes from an unexpected source and pitches Locke and Jean in competition with a former friend. Their competition is to rig an election and it’s ridiculous and fun. So much fun that I found it hard to want to read the flashback sections. Other readers may feel differently.

In this novel, Locke’s past becomes more mysterious. We learn something that may or may not be true. If it is true, Locke could change and evolve in future novels. Receiving a prophecy of sorts, we get a glimpse into what future novels may be about, as there are “three things must you [Locke] take up and three things must you lose before you die: a key, a crown, a child. You will die when a silver rain falls.” Locke could have conceived a child in this novel. As for the rest, we’ll have to wait and see.

I enjoyed The Republic of Thieves, but it could have used more editing. That seems to be my biggest complaint with Scott Lynch’s writing: it feels rushed. If you are interested in fantasy novels with snappy dialogue and a charming thief, be sure to check out this series of books.