The Buried Giant by Kazuo Ishiguru 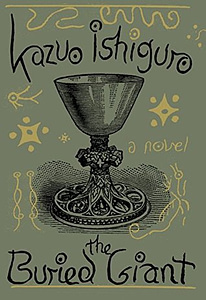 Is there a purpose to forgetting? By not dwelling on certain moments allow one to move past those moments? Forgetting is the central concept explored in Kazuo Ishiguru‘s The Buried Giant. However, instead of the everyday forgetfulness one encounters, a malaise of forgetfulness has settled on the realm in which Axl and Beatrice live. But, how does one know forgetfulness reigns supreme, if one forgets their suspicions of the past?

Love binds and guides Axl and Beatrice. They are an older couple and love one another dearly. They believe they may have had a son and love him as well. As their prospects worsen in their village and an outsider spreads rumors of forgetfulness not being normal, Axl and Beatrice set out on a quest to find their son and live with him.

On this journey they encounter a boatman who ferries people to a wondrous island. Later they stay in a Saxon village beset by trouble. Ferocious ogres have attacked and kidnapped a boy. A warrior from a distant land offers to rescue the boy. As the warrior returns with the boy it appears he has been wounded by the creatures. Discontent grows in the village and when Axl and Beatrice leave, they are accompanied by two more companions.

An aged Sir Gawain plays a role in the novel and Ishiguru paints him heavily with a shade of Don Quixote. This Gawain appears to be on a fool’s quest and his foes seem more imaginary than real.

In searching for their son, Axl and Beatrice seek the return of memory, but what will memory bring them? Has their happiness and love flourished over the years because they cannot remember the wrongs one has brought against the other? Did their son leave because of something they did? What are the memories that will break a couple? For that matter, what are the memories that will break an entire people? The risk is there. If memory returns, what will happen to the people whom live in this land?

I almost didn’t read The Buried the Giant. The first review I read in the New York Times panned the novel. Then, I read another New York Times review by Neil Gaiman, which was far more forgiving. Finally, I read a conversation between Neil Gaiman and Kazuo Ishiguru that made me more interested in the novel. In the end, I did not like The Buried Giant. People need memory to shape identity. One problem with The Buried Giant is that Axl and Beatrice feel more like caricatures than characters. In my mind I imagined the novel more as a claymation Wallace and Gromit, than a more serious work of fiction. However, unlike Wallace and Gromit, The Buried Giant isn’t funny either. It flounders along on repetitive dialogue and semi-serious fancy.

As for readers who became annoyed that Ishiguru seemed to write a fantasy novel, but market the book as literature, that was not an issue for me. Yes, there are ogres, knights, and dragons. No, it doesn’t fit some of the conventions of contemporary fantasy. The novel operates in its own conceptualization of fantasy and what better way to have a people forget than by magic? What did not work in the novel was the lack of depth, even though Ishiguru is delving into memory. The story raises a large question toward the end, but is that question enough of a pay off for the reader? Alas, for this reader, the answer is no. The Buried Giant is a book I won’t remember for long.