Lexicon by Max Barry is a plot-dependent novel based on the idea that there are hidden words which let some people manipulate other people. The chapters are intermixed with emails, news reports of the events, and discussion forums where normal people work the corners of the conspiracy theory that a shadowy international organization controls events.

The idea behind Lexicon isn’t new. Neal Stephenson takes on a similar theme in Snow Crash and does a masterful job at creating a bizarrely, wonderful world. The world and characters in Lexicon are flat and unimaginative in comparison. 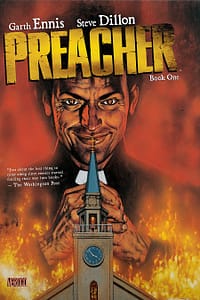 Another narrative that is build around the idea of a language or voice that can control people is the comic book series Preacher written by Garth Ennis and drawn by Steve Dillon. In Preacher, the main character, Jesse Custer, is bonded with a creature born from an angel and a demon. The process wipes out Jesse’s congregation and leaves him with the power to command people with his voice. Whatever he says, they’ll do, much as in Lexicon.

I bring up these other two stories, because they do a much better job with the topic than Lexicon. Preacher is irreverent, funny, and creative. Snow Crash is creative, unique, and sets the stage for cyberpunk novels. Lexicon is a book you buy at an airport.

Will the book suck you in? Probably. Is there much depth? Not really. While there are twists toward the end of the novel, it’s reading for the sake of seeing how it will unravel. It’s not reading for beauty or complexity.

Finally, the ending of the book disappoints. Barry could have gone for a strong ending; but instead, he tacks on two pages of happily-ever-after. I’m sure some readers will like that, but I found it cliché.

In the end, I don’t recommend Lexicon unless you’re in an airport and desperate. There are other books out there that tell this story so much better.