Clifford the Big Red Dog Digs Master’s Grave, Then Lays Down to Die 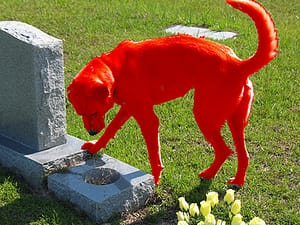 Martha’s Vineyard—Once a month, Marjorie Thompson, lays flowers down in front of her husband’s headstone. During all of her visits to the West Tisbury Village Cemetery, Marjorie never saw a sight so strange. “I’ve never seen a dog so big,” said Mrs. Thompson, “He was taller than the Edgartown Post Office by an inch. And he was just digging and digging to beat the band.”

After watching the dog, Marjorie snapped a picture with her mobile phone and sent it to her grandson, Mark, who quickly posted it on Reddit. As a crowd of citizen large-dog enthusiasts poured over the image, the dog was identified as Clifford. But what was he doing in the West Tisbury Village Cemetery so far from Emily Elizabeth?

Clifford, we learned, was digging the grave of Norman Birdwell, his original master, who died on Friday, December 12th at the age of 357 dog years. While Clifford’s previous digging experience has been in the service of paleontologists, he shouldered the sad news with aplomb and carried out his duty.

As Clifford dug, a crowd formed around the big, red dog with people laying books down in remembrance. Clifford remained in place during Birdwell’s funeral and once the coffin was lowered, Clifford quickly filled in the earth and lay down. Not wanting to disturb a dog in mourning, the crowd dispersed and left Clifford to his grief.

However, three days later, Clifford still had not moved. Flying from Birdwell Island, Emily Elizabeth, tried to coax Clifford away with an extremely large dog biscuit. When that didn’t work, Emily Elizabeth organized the Edgartown Fire Department to try and raise Clifford up with a giant winch. In a manner most out of character, Clifford growled and snapped at the cable, sending firemen scrambling. When nothing else could be done, Emily Elizabeth lay a hand on Clifford’s big, wet, apathetic nose, then walked away.