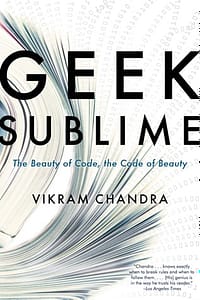 What are the commonalities between a fiction writer and a computer programmer? How do Indian views of beauty and aesthetics relate to these two activities? Or perhaps, another way to say that is: how do writing and programming appear when seen through the perspective of Abhinavagupta? In Geek Sublime: The Beauty of Code, the Code of Beauty, Vikram Chandra takes up these questions in the context of his own life.

The first six chapters held my attention. Chandra talks about the logic of language, learning to write, and the beauty of code. As much as the book is about writing and programming, it’s also a conversation between Chandra and himself. His personal tale of becoming a writer and a programmer weaves throughout the chapters. Chandra’s story lends a conversational tone to the book and exposition that could be dry is engaging because of his voice. When he talks about the beauty of code, the reader can see Chandra’s connection to code.

When Geek Sublime delved into the philosophies of Abhinavagupta, I became lost. Instead of furthering the connections between writing, programming, and aesthetics, the added philosophical layer became a barrier. As much as I thought of myself as a potential audience member for this book, being someone who both writes and codes, I began to doubt that assertion. I was not searching for aesthetics. Nor, was I searching for literary theory.

Perhaps the many layers to Geek Sublime allows the reader to enter and exit at points of their own choosing. One unexpected part of the book, which I enjoyed, was the history and description of gender in tech culture. Initially, programming was seen as women’s work.

In fact, the earliest programmers were all women: the “ENIAC girls” were women recruited by the (male) engineers and managers of the Electronic Numerical Integrator and Computer. The creators of the ENIAC had a clear division of labor in mind: the male scientist or “planner” would do the hard intellectual work of creating the mathematical algorithms and structures necessary to sold a problem; the female “coder” would then carry out the “static” manual labor of entering this plan into a machine by manipulating plugboard wiring and thousands of switches.

Chandra then explores the current culture of programming and it’s focus on arrogance and machismo. It’s interesting to see this shift and hear about it from someone who is part of the programming community.

Geek Sublime is not for everyone. However, if you are somewhere between the intersection of writing and programming, and on a quest to better understand beauty, the book may be for you.