In The Train – Christian Oster 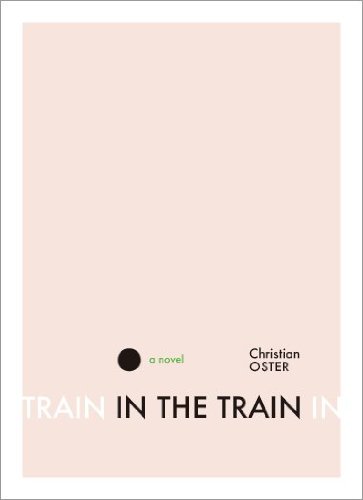 In The Train is the fourth Christian Oster novel to be translated from French into English.  It may be more accurate to call In The Train a novella rather than a novel, because it’s a slim volume that focuses specifically on two to three characters over the course of a weekend.  Written in first person, the reader follows the narrator, Frank, as he waits on a train platform.  What is he waiting for?  What are we all waiting for?  Love, of course.  Or is it that Frank is waiting for the illusion of love?  He yearns to be with a woman, to have weekend adventures in out of the way towns, comfortable silences together.  He yearns for a connection that will stay solid over the years.  It makes sense of course, to wait on a train platform, hoping that moment will occur when he meets such a woman.

Thankfully, Frank, is aware of his own shortcomings, and the ridiculousness of his idea.  He does meet a woman.  He falls in love with her over the span of minutes.  Forceful in his approach, he won’t let her ignore him.  But does, Anne, the woman he meets, have her own intentions?

Oster grounds the reader deep into Frank’s head.  We see his fears and anxieties, his inabilities to express himself properly to Anne.  Frank is awkward, slightly neurotic, and dogged in his pursuit of Anne.  By being in the first person, the reader is able to see the whole thought process of Frank.  It makes him safe.  If it were written in the third person, much care would need to be taken to write Frank in a way that didn’t come off as obsessive and similar to a stalker.  His intentions would have been less clear.  The reader can see that Frank is harmless, while Anne still needs to puzzle through his actions and sentences.

This being the first work of Oster that I’ve read, it took some getting used to his style.  Sentences are choppy.  Fragments abound.  Ideas start.  Only to stop or change direction.  It has two effects.  First, it seems more personal, more Frank than straight prose.  Second, it almost works to slow down the pace.  That is counter intuitive, but because Oster uses so many commas throughout the sentences it changes the flow.  Think of poetry and the use of commas or lack of at the end of a line break.  Grammatically, a comma should be there.  However, removing it, the reader still pauses as their eyes move to the next line.  Put the comma in there, and it’s like an extra pause occurs.  Maybe a change from a quarter beat to a half beat.

In some ways, In The Train, reminded me of Haruki Murakami’s writing.  Frank is adrift, and almost a blank canvas for the reader to project themselves on.  Frank’s name is hardly used.  There is not much description of him.  There is hardly any past.  All we know, is that Frank feels to be uncultured compared to Anne, and makes allusions to his lack of university education.  He’s middle aged, has a decent job, but isn’t challenged by it.  His life seems full of predictability, routine, an existence that leads him into standing on train platforms, hoping to break up the monotony, leaving himself open for whatever may happen.  Frank is open for whatever Anne has in store for him.  Will she be the love of his life, or will she use Frank to meet her own ends?  Selfish and complicated, Frank, is worth following as he seeks to move from being a curiosity in Anne’s life to something greater.

The translation of In The Train, is published by Object Press, and available in paperback on Amazon.