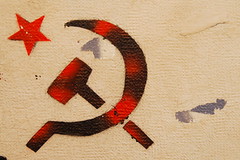 What I appreciate about Don DeLillo’s story “Hammer and Sickle” is the immediacy of it.  The character, Jerold Bradway, is in a minimum security prison for white-collar criminals after being convicted of fraudulent hedge-fund deals.  In the background of Jerry’s prison life is a TV segment in which his two daughters read a surreal stock market report on a children’s show.  The children’s interplay is orchestrated by Jerry’s soon to be ex-wife. What affect does this have on the story?  How can a writer add in events in a way that works?  How may adding in current or past events burden a story?

For “Hammer and Sickle” it sets Jerry in time and space.  We know the story is taking place in 2009/2010.  We know Jerry is one of those who contributed to the mess, or at least he’s a face.  Also, it’s part of Jerry’s story.  Financial markets, hedge-funds, those are parts of Jerry’s world.  They have meaning to him.

In this way, the current events work.  They play out as a surreal chorus, which echoes along with Jerry’s thoughts and breaks the monotony of the prison.  Using events as context or a view into the characters mind/way of thinking is excellent.  Say you have a character who listens to news about the BP oil spill, then shrugs in indifference.  What’s that saying about the character?  It may say he doesn’t care about the environment, has never been to the Gulf Coast, is generally self-absorbed and disconnected.

On the other hand, adding in events can seem clunky or disjointed if there doesn’t seem to be a reason for them, or if the story is more focused on the event than the characters.  Great stories always come back to dynamic characters.  An example of events overshadowing characters, is American Rust, by Phillip Meyer.  The novel focuses on the decline of the Rust Belt and those sections of the book are clear and well written, however the characters are two-dimensional and flat.

“Hammer and Sickle” is an enjoyable story that fits well with DeLillo’s previous work in Falling Man and White Noise.